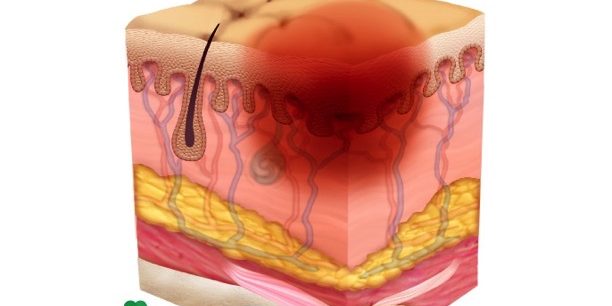 What is a Pressure Ulcer?

Called decubitus ulcers, pressure injuries, or more commonly, bedsores, pressure ulcers are localized areas of damage to the skin as a result of pressure or friction. Because pressure ulcers are largely considered avoidable injuries by utilizing simple preventative measures, their presence is often looked at as patent evidence of neglect by a nursing home. As the pressure or friction is sustained or increased in frequency, the pressure ulcer increases in severity as tracked by different stages, beginning with Stage I and increasing to Stage IV. As the wound degrades through these stages, it becomes a greater risk to a resident’s health and can lead to infection that can ultimately be fatal. As such, it is important to recognize the earliest stages of pressure ulcers so that immediate remedial interventions can be put in place. A Stage I pressure ulcer is the earliest evidence of pressure or friction related trauma to a resident’s skin and is often the hardest to notice via a cursory examination. This is because a Stage I pressure ulcer may not show any openly obvious signs of damage apart from a reddening of the affected area. As such, it is important to test the skin by pressing the reddened area and watching for any blanching of the skin (temporary loss of color) and feeling whether the area is harder or softer than the surrounding skin. If no blanching occurs or there is inconsistency in firmness of the skin, then the area is most likely a Stage I pressure ulcer. A resident will often voice complaints of discomfort or stiffness in the area, however if treated promptly the skin will often recover from this stage. A Stage II pressure ulcer occurs when the wound degrades to a point that the skin cracks, tears, or otherwise breaks beyond the epidermis (outer layer of skin). At this stage the pressure ulcer expends into deeper layers of skin, creating the appearance of ruptured blisters or burns. Pressure ulcers at this stage can be noticeable with only a cursory examination, therefore progression to this stage is stronger evidence of neglect by the nursing home. Additionally, the pain to the resident is often the greatest in this stage, as tissue damage becomes more extensive in Stage III and IV. Unfortunately the damage to the skin may be irreparable if the pressure ulcer degrades this far, and remedial measures may only be able to save any undamaged areas.

What Should I Do?

If you notice Stage I or Stage II pressure ulcers on a loved-one while they are inside a nursing home, you should act quickly to obtain medical assistance and attempt to remediate damage to the skin. Additionally, you should put the facility on notice of the neglect occurring and consider removing your loved one from the facility. If you suspect a loved-one may be the victim of abuse or neglect, seek legal advice from a nursing home attorney immediately. The next article in this series will cover Stage III and Stage IV pressure ulcers.